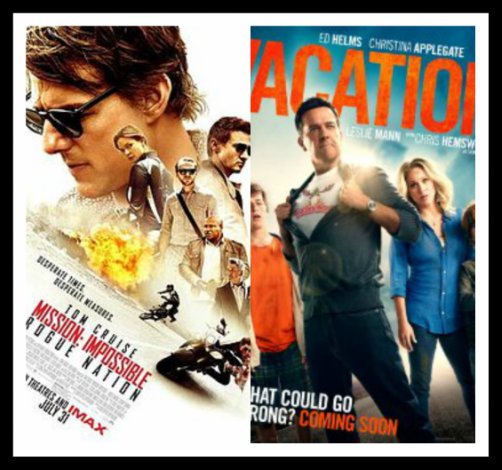 In the 12th match-up for the ‘I See Movie’ of the Week poll we quickly went back to a two movie battle with this weeks participants being ‘Mission: Impossible – Rogue Nation’ and ‘Vacation’. The results are in! So which movie did you all choose as the go-to viewing for the week? Find out which one is the winner below, as well as my personal pick.

‘Mission: Impossible – Ghost Protocol’ brought some great new energy to the franchise and I’m hearing great things about this one so I’m excited. Tom Cruise has really rejuvenated his “I’m an action star” career with movies like ‘Ghost Protocol’ and ‘Edge of Tomorrow’ so maybe he’s embracing the super hot streak he’s on and I’m just going to stick around until it flames out.

The readers and I are on a roll when it comes to this whole agreement thing. Maybe we’re all in agreement that Cruise is back and that his streak is going to continue with this flick. A sixth movie in the franchise is already being planned so the people over there at Paramount must be really confident in this sequel and the direction the franchise is going in. It looks good so hopefully it’ll leave me wanting another but we’ll see. But anyways, I’ll be adding an ‘Mission: Impossible – Rogue Nation’ review to the list of all the movies I said I’ll write reviews for. Don’t worry, they’re coming in the (near or not so near) future.

For next week, we get the first four-way movie battle in ‘I See Movies’ history!Alright enough of the excitement. But the four movies battling it out will be ‘Fantastic Four’, ‘The Gift’, ‘Ricki and the Flash’ and ‘Shaun the Sheep Movie’.

‘I See Movie’ Pick: ‘The Poltergeist’

Readers Pick: ‘Inside Out’

9 thoughts on “‘I See Movie’ of the Week Winner: ‘Mission: Impossible – Rogue Nation’ vs. ‘Vacation’”