This was a fun movie with a fun cast full of nobodies. It’s like you were going along for the time traveling ride with the group of friends. It was an entertaining flick that used a often used sci-fi concept of time travel in an interesting way but didn’t create anything memorable or anything like that. Once the fun had to be put to the side in order to get the plot and conflict going, things started to go down forgettable movie territory and no I’m talking about a movie that I don’t remember that much.

This slow burning psychological thriller reminds me of another movie on this list, ‘Ex-Machina’. They both have that same feel of that slow burn that all leads up to a twist of an ending. They are both good movies but I have them this low on the list because I can’t figure out how much I like them or maybe don’t like them. I probably need to see them both again to come up with exactly how I feel…yeah that’s what I’m going to do. The reason I have this one a little higher is because the story was simpler but easier to understand and played out in a more interesting manner.  It also did a good job making you think something was always about to happen even when ultimately didn’t. Jason Bateman did a great job as someone whose true colors slowly unraveled throughout the film. Joel Edgerton did a good job pulling triple duty with starring, directing and writing. Now only time (and an extra viewing) will tell if this movie should be higher on this list.

I didn’t find this movie hilarious (which is why it’s not higher on the list) or nothing but it was funny. I just found Jack Black’s character to be entertaining while he yearned for his “friend’s” acceptance. It was so hard for him to say no to Oliver (James Marsden) that he did something extreme that threw his mindset into a whirlwind and had a lot to do with how the rest of the movie played out. The ending was pretty weak because it tried to force a “lesson learned” and made things seem better than they should have actually been. But I’ll just say that I watched this movie in the midst of a tornado warning and I am not upset about that decision.

Man this movie was childish. Don’t get me wrong, I was laughing at all the childish vulgar humor but at the same time I was thinking OK some of this could be replaced with some different jokes that some thought was put into it. But still, the movie had me rolling throughout. The story had the potential to be something special. It’s like they were brainstorming the plot elements and everything was coming out cool but when it was time to write the script, it didn’t come out exactly how they wanted; Which made the first movie’s story better. It still was an entertaining movie that had some cool future references and some funny after the credits scenes.

This movie started out shaky, including Rihanna’s suspect voice acting skills, but Jim Parsons as Oh was entertaining throughout the movie. He brought plenty of laughs and then other characters decided to jump in and help (that includes Steve Martin as Captain Smek). There were also some sad, touchy moments at the end that might have hit home for some softer individuals (not me of course). I can’t forget to mention the great animation that was displayed on screen as well. What bothered me about the movie, though, was the dub step type music that was playing during some of the “action sequences”. That music choice made the already not so exciting scenes even less exciting for me. AND the plot of the movie was kicked off in a stupid way TO ME. I know it is a kids movie but an email being sent to everyone in the galaxy, even your enemies, is what gets things kicked off? Why do you have your enemy’s email address? The end kind of made up for that element of the movie but the damage was already done. 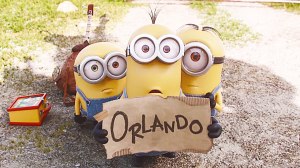 I thought this was going to be one of my favorite animated movies of the year because your taking the best and funniest part of the ‘Despicable Me’ movies and giving them their own movie which means more time to shine. Unfortunately, what I got was another let down. The movie was funny but it wasn’t funnier or even better than the ‘Despicable Me’ movies. I guess those minions, who speak in a language filled with part jibberish, part Spanish and part gang-banging lingo, are great side kicks who can steal the show in that role but shouldn’t be the headliners.

This was a solid looking film that was led by Joseph Gordon-Levitt and his not that annoying accent. The story of the preparation before the big walk across the World Trade Center went as far as it could in the entertaining category but then when the big event happened, what seemed like a serious potentially dangerous moment became silly in a way I wasn’t expecting. If Philippe Petit (Gordon-Levitt) really started playing around up there to try to get away from the police then so be it (and no I’m not doing any research). But if not, then I think it was a lackluster conclusion, even in a movie that included plenty of jokes throughout.