This ‘Paranormal Activity 4’ review was written back in 2012 so you’ll notice that it clearly dates itself but you’ll quickly notice that. Also, I feel like my opinion on this movie has dropped slightly than what it was when I initially wrote this review but go ahead and find out exactly how I felt after it’s release a little more than 3 years ago.

‘Paranormal Activity 4’ has reportedly brought in $30.2 million in its opening weekend. Although that’s a major profit since it was made for $5 million, that amount is still less than the previous two movies in the ‘Paranormal Activity’ franchise and rightfully so based off what I watched.

Four years after the events of ‘Paranormal Activity 2’, we meet another family who start noticing weird events going on around them when Robbie (Brady Allen), a boy who lives across the street, stays with them while his mom is in the hospital. The daughter in the family, Alex (Kathryn Newton), and her boyfriend, Ben (Matt Shively), are the only ones who sense something is wrong with Robbie so they set up laptop webcams to catch his middle-of-the-night escapades but catch more than they expect.

Yeah, I Liked That

It’s good to see a ‘Paranormal Activity’ film take place in present time (in the film it’s Nov. 2011 to be exact). After

witnessing the makers of the ‘Paranormal Activity’ franchise make their films enjoyable that are set in the past, whether it be 2006 or later, it was nice to see what they could do with the cool technology available to the world now. The idea of using the sensors from the XBox 360’s Kinect in the dark is a great example of how today’s technology was worked into the film. Also, I like the idea of using laptop webcams as the primary source for a camera. I’m glad the makers went in a different direction camera-wise, instead of bringing back a camera technique used in one of the previous three films.

While the  ‘Paranormal Activity’ films are clearly slow paced, they all add an element of humor to not make us just want to fall asleep. This time around was no different thanks to, primarily, Shively as Ben and Allen as Robbie. While Shively steals many scenes with a typical comedic approach, Allen’s is somewhat different seeing how he plays a mature for his age child which, of course, comes off as weird. The film also keeps viewers wondering what’s going to happen next and when it’s going to happen, thanks to the other films in the franchise. That feeling is something you expect when watching a  ‘Paranormal Activity’ film and is another one of the elements that make a dull moment in the film not seem so bad.

The writers of ‘Paranormal Activity 4’ must have just set out to write another entry into the franchise and that’s it. 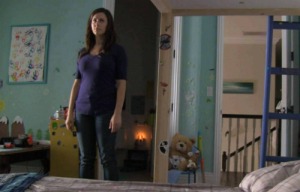 There must have been no intent on answering many questions that fans have been eager to have answered from previous films in the franchise because that’s exactly how it seems after watching this fourth installment. The story of the whole demon and cult mythology created in the ‘Paranormal Activity 3’ is not moved forward in the slightest. Elements in the story even come off as being put together lazily. I can’t tell you if the only camera technique at the beginning of the movie is webcams on laptop and that’s a problem. Also, the character of Robbie seems more and more like he is going to play an important role as the movie ends (especially when we learn his relation to Katie who appears in the previous three films),but then he just disappears when that time comes around and we aren’t told why. That is also a problem. That all leads to a weak ending that does nothing but scream for a fifth installment for the series.

‘Paranormal Activity 4’ didn’t sway away from what we come to expect from the  ‘Paranormal Activity’ franchise but it didn’t do the one thing this movie needed to do and that is answer all these open questions they created. Not only did the film not answer most of the questions, but it also created more questions leaving the viewer scratching their head in confusion. It does make good business sense since it should make people want to come out and see the recently announced ‘Paranormal Activity 5’ but it’s very frustrating for the fans of the franchise.

P.S. Once again here is my rating scale. There are four different levels. Below is each level in order from best to worse and what each one means.

Must Own = A movie that is so good that I must add it to my Blu-ray collection when it comes out.

Would Accept as a Gift = I enjoyed the movie but don’t necessarily have to buy it (especially if I don’t have the funds to) myself but I would take it if someone bought it for me.

Might Rent = A movie that if I have the urge to watch again then I’ll just rent it from somewhere or Netflix it.