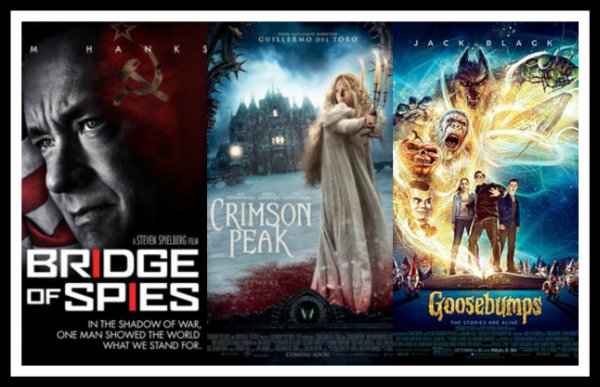 Last week’s ‘I See Movie’ of the Week match-up saw ‘The Walk’ WALK home with the victory…man I’m a comedian. Neither participants from last week excelled at the box office but ‘The Walk’ didn’t bomb nowhere nearas bad as ‘Pan’ so I guess that’s another victory in itself. Also, thanks to everyone who voted.

Now on to the week 21 match-up. This week, we are back to the three flick battles that love to pop up here and there so often. The latest Steven Spielberg thriller, ‘Bridge of Spies’, will go up against Guillermo del Toro‘s R-rated horror flick, ‘Crimson Peak’ as well as ‘Goosebumps’ which looks a lot more goofier than I remember it being as a kid. Will those who want to see Tom Hanks put his good acting skills on display, as usual, (I’m just assuming he will because when does Hanks ever stink up a movie?) vote for ‘Bridge of Spies’? Will those who want to see an artsy looking scary movie with a great cast vote for ‘Crimson Peak’? Or will those who are in favor of watching my childhood be ruined vote for ‘Goosebumps’. Please vote below with your choice and comment on why you chose the one you did. My choice and the readers choice will be revealed Friday, October 16th. The winner (more specifically, the readers pick) will (eventually) get a review from yours truly.