Here are the movies that came in at #70 – #61 on my complete movie list for 2014. Just a quick tease for you…you’ll see some overrated horror movies in this section of the list. Oh, and you might see some SPOILERS as well.

A funny movie but the plot had the potential to go places but literally went to like one place…and that was to the boss’s house. The movie could have been about the couple going to all these different places trying to retrieve the iPads with the sex tape on it and then realize at the very end that the video could have been deleted very easily without having to do all that.

When I was reading that many critics thought this was the best scary movie they seen in years, I was pretty amped about seeing it. I went in the theater and liked how things started; I mean I couldn’t stand the little boy in the movie so it was making me some feel things, the monster seemed like he was going to look pretty creepy and the plot seemed like it was going to add some high level entertainment value. But what the ‘Babadook’ book promised didn’t really happen (besides the killing of the poor dog) and that was upsetting because that was what the movie should of focused its buildup to. Then the ending really stunk and showed the low budget value. There’s nothing wrong with low budget but you have to back it with some good storytelling. So this movie has to be extremely overrated or I might need to just watch it again. I will say, though, that Essie Davis‘ performance as the mom was the highlight of the movie.

68. A Walk Among the Tombstones

I was looking for more of a “who done it” thriller out of this one. But the detective nature of the film did a decent job

taking the place of the action that has been in Liam Neeson’s recent movies. Just the more the movie moved forward, it became more different than I would of liked it to be. And I really wasn’t expecting to see ‘Astro’ come in and be the comedy relief in what was supposed to be a dark film. Because of that element, this movie had an identity crisis half of the time.

It felt different compared to recent scary movies which is a good thing. The end, however, was a let down. One of the more liked horror movies of the year seemed like it was going to be great with its hard to describe plot elements. But that ending though; it just seemed to let all the air out of the balloon. Sorry, I just made up that phrase and I know it sucks but I already typed it out so….

I expected this movie to be much better than it was. The action and violence was entertaining but it came in a few doses and Denzel Washington was good of course (what’s new). The story, though, was extremely weak to me, even for an “action” movie. After the initial reason for McCall’s (Washington) actions, it wasn’t really explained why he continue to do what he was doing. Maybe it was just to protect himself or maybe he’s just a nice guy. I’m sure the reason was explained but it wasn’t what I was looking for. Also, I now know why I never saw Chloe Grace Moretz in any of the trailers. She’s in the beginning of the movie and then just disappears until the end.

A very interesting film that I believe should have been longer. More action would of definitely helped too. You have to take advantage of someone having superpowers because they’re actually using their brain. Also, having Scarlett Johansson star in the film is, as always, an automatic positive. I did notice that this role for her reminded some of her role in ‘Her’. In both films she basically knew everything and could complete impossible tasks very quickly and such. But in this film she was actually a living breathing person. Just thought I point that out. The movie did get odd at the end. Trying to be risky I guess.

I liked that it wasn’t really a children’s movie because it contained more adult elements than I expected. With that said, the movie was fairly enjoyable. I would of liked to see more of the boxtrolls than there were. They seemed to remind me of less funnier version of the minions from ‘Despicable Me’. The message behind the movie has a nice little message you expect from these “kids” movies nowadays so I believe it did a decent job doing what it set out to do.

This movie was more violent than I expected but that’s fine with me. That element made me become a little more 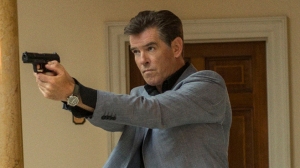 interested in a movie I really didn’t care if I saw or not. Pierce Brosnan and the rest of the cast made the action sequences entertaining but nothing out of the ordinary for a “spy thriller.” The movie did, however, start to take a dip in the third act when the action wasn’t as exciting and the (weak) twist started to roll in. All in all, the movie was better than I expected so I wasn’t mad at the outcome.

All I really want to say is that Leslie Mann shinned. She made a should of been mediocre movie into something better thanks to the laughs she brought to the plate.

This movie was clearly made to get some money off ‘The Conjuring’ brand and that’s typical for the world we’re in now. It was no where near as good as the movie it was a spin-off of but it did start out strong. It had some solid scares (I really liked the scene where Mia (Annabelle Wallis) was in the elevator trying to escape the basement but every time the door opened it would open up right back to the basement. Just a nice technique to leave all the chickens out there with their hands over their eyes) but the third act and the just outright bad ending let the movie fall flat on its face…or flat on its head (Kind of a play off what happened at the end. I’m just on fire with the bad jokes right now)