James Cameron just recently talked to Empire about how awesome the THREE ‘Avatar’ sequels will be. Cameron was quoted saying, “They’re gonna be b****in’. You will s*** yourself with your mouth wide open.”

That’s a lot of confidence Cameron is showing and I’m not mad about that at all. You’re supposed to feel that way about a movie you plan on spending  so much time on. I mean you don’t have to use the exact same words but you get what I’m trying to say. Anyways, the boasting is not the problem here. The problem is that he reminded me that there will be not one, not two…but THREE sequels to ‘Avatar’.

Now I like plenty of franchises that have more than one sequel but does ‘Avatar’ really warrant all those sequels? I mean I am a  big fan of the ‘Saw’ series and people can probably make the argument that all those sequels were necessary but that’s not what we’re talking about here. The focus is on ‘Avatar’. The first one was a great movie but I think much of that had to do with how good it looked (especially IMAX 3D); The story was so-so. I feel like even if Cameron keeps giving us different cool looking environments to visit in the movies, that will become less of a spectacle and the story will become more important. If the stories don’t get any better, the sequels will definitely not be necessary. 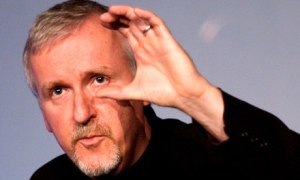 Is Cameron doing all these sequels because he feels like he has some cool stories to tell? I sure hope so because he doesn’t seem like the filmmaker that’s doing it for the money. I mean if he is doing it for the money, I can’t really be mad though because if I had the highest grossing movie off all time…scratch that…the TWO highest grossing movies of all time (he also directed ‘Titanic’ which is number two right behind ‘Avatar’ for those of you who don’t know. since we’re on the subject of ‘Titanic’, shout out the great Leonardo DiCaprio) than I would want to definitely try to get all I can out of that money machine but I just don’t see Cameron as that type of person. Maybe that’s just my fault. Still, four total movies isn’t necessary. If your trying to get all the money you can, just stick to a typical trilogy. I know it’s the typical route but I feel like I haven’t even really heard people clamoring for all these ‘Avatar’ movies (or maybe I’m not really listening) so three is doable. These movies are probably going to be long like the first one so four just seems like your over staying your welcome.

There’s probably a 100% chance I will see all THREE sequels but I’m not saying I’m going to love them all. I sure hope I do though if I’m going to spend that much time on this franchise. Even if I’m going to see them, I can still feel they aren’t really necessary. Am I alone in feeling this? Vote below for how many ‘Avatar’ sequels you would like to see. Also feel free to comment below with your thoughts on the upcoming sequels or if you just want to tell me how wrong I am.